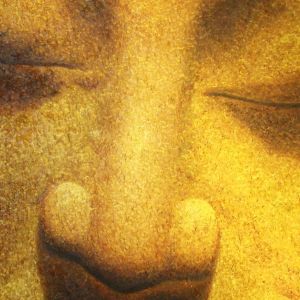 We are the Map

Except for it being a foreign word, Qi is not really exotic. It’s just energy. Everybody talks about it all the time: what it does, the different kinds, what happens when there’s not enough of it or too much of it. But the mystery is that nobody can say what “it” is, exactly, even though it is the basis of Western Science and of Chinese Medicine. Western Science says:

Einstein said that matter and energy are interchangeable and that nothing is lost in the interchange.

which says that mass times the speed of light squared equals energy. Or energy equals matter times the speed of light squared. Goes both ways. We haven’t figured out how to put the atomic blast back into the uranium yet, but we’re working on it. Physics now tells us that what we experience as solid matter is really just energy moving so fast that it seems solid, like an airplane propeller at full speed.

The Chinese character for Qi is very similar to Einstein’s formula, only in pictures.

It is a combination of two characters:

which is rising from

This is another way of saying that matter and energy are manifestations of the same thing: “Qi.” This character also carries the connotation of “life force” when applied to living beings. This is especially appropriate coming from the East, where what sustains life is rice, as wheat is the “bread of life” in the West.

Western Science names energy by functions that it can measure. Energy stored in a battery is “Potential Energy.” Energy given off by a lamp is “Radiant Energy,” or light, while the energy that powers the lamp is “Electrical Energy,” or electricity. In a stove, that same electrical energy may produce heat (“Radiant Energy”); in a phone (smart or dumb) it also produces sound (“Mechanical Energy,” because it moves the air). Radiant Energy (heat) and Chemical Energy (digestive enzymes) may be necessary to release the Chemical Energy in molecules of food that can then be combined with the Chemical Energy released from molecules of air to form ATP (adenosine triphosphate). ATP is the molecule that is the main energy source for the majority of cellular functions. It’s all Qi.

Chinese Medicine is all about observing Qi in all its forms as it affects human beings. That includes the Qi in the environment, the movement of Qi in emotional expression or inhibition, and the Qi that necessary for biological processes. Human anatomy (matter) and physiology (action, function) are Yin and Yang aspects of Qi. Cells, which are the basis of all tissues and organs, maintain their physical structure (matter – Yin Qi) when they have a constant flow (movement – Yang Qi) of nutrients (matter – Yin Qi) that they transform (Yang Qi) through chemical breakdown and recombining of molecules into other structures (Yin Qi) or fuel (Yang Qi). They are just a way of describing what the Qi is doing. It’s all Qi.

So on the cellular level, where there is a supply of Qi, there is life. Where there is no Qi, no life. When cells die, the function of tissues is impaired. Pain, dysfunction, disease, and eventually, death are the result. Very simply put, Chinese Medicine is the study of the sources of Qi, its transformation for use by the body, and how it is transported to where it’s needed through the anatomical pathways called “meridians.” Physical symptoms arise when one of these aspects is out of balance. Is there too much? Too little? Can it get where it needs to go? Is there something in its way, or slowing it down, or speeding it up too fast? If the Qi can be restored to proper movement and function before too much tissue death happens, the tissues will restore themselves. In Asian Bodywork Therapy, we remind the body of the natural flow so that what is in the way can be identified. The body tells us where to look.

When we find it, we have means to address it by energy work if the imbalance hasn’t led to irreversible damage to the material level: the tissues. It is only when things have gone too far that methods that replace normal body functions are needed. If tissue is too compromised to heal, sometimes it will help to cut it away to keep the decay from spreading. If an organ is so depleted that its function cannot be restored from the inside, sometimes drugs or procedures that imitate its function can save a life. Traditionally, the practitioner was expected to keep her patients healthy so that she wouldn’t have to resort to these invasive, yet life-saving measures. The goal is to reestablish balance of all the activities of Qi before it becomes necessary to take over for them.